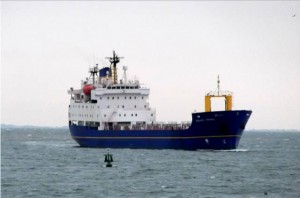 The NDA-owned ship Oceanic Pintail shown returning to its home port of Barrow-in-Furness on the evening of 29th February after its covert voyage to dump yet more plutonium at the Savannah River site in South Carolina.  Originally sailing from the German port of Nordenham in late January, the highly secretive shipment of over 20 kg of plutonium from Swiss and German research facilities reached the US port of Charleston on 15th February for onward transit to Savannah River. As just one of a number of such shipments being made under the US-led Global Threat Reduction Initiative, the US Department of Energy has remained as tight-lipped about the Pintail’s ‘under the radar’ plutonium delivery as it has on the shipment  – by Barrow-based ships Pacific Heron and Egret – of over 300 kg of plutonium expected to leave Japan imminently for similar dumping at the Savanna River site.

In contrast to its hush-hush voyage to and arrival in Charleston, the return to UK waters of the ageing Oceanic Pintail – now some 3 years past the nuclear fleet’s customary shelf-life of 25 years – was marked by the ship’s readily observable antics in the Irish Sea on  29th February – Leap Year day.  For reasons yet unknown, but nevertheless adding to the many weird  traditions associated with that particular day, the Pintail decided not to head straight home to Barrow after its two-week stormy track across the Atlantic but instead to spend 18 hours chasing its own tail  in circles off the Lancashire coast. 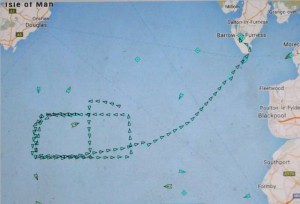 Given the start of the Mad March Hare season, it is clearly not for nothing that the ship has become known to ardent observers as the Bobtail. With the ship finally berthed in Barrow’s Ramsden Dock nuclear terminal, old sea-salts around the dockside were at a loss to explain the ships’s bizarre behaviour and unable to agree whether such antics had resulted from a mutiny on board; navigation charts eaten by rats, a drunken helmsman or broken rudder, a man overboard or escaping the attentions of an amorous submarine. We may never know, for it is more than likely that neither ship owner NDA nor its subsdiary company International Nuclear Services who mange the vessel will wish to come clean about  the big-top performance.