Some 25 years ago Sellafield’s then operator British Nuclear Fuels plc (BNFL) took many by surprise by publishing plans to supplement Calder Hall’s electricity output (for Sellafield site use) not with a new nuclear plant but with a Combined Heat and Power plant (CHP) that would run on natural gas pumped from the Irish Sea via a Barrow-in-Furness land hub.

The 168MWe Fellside CHP plant, now owned by the Nuclear Decommissioning Authority’s subsidiary Sellafield Ltd and operated by PX Group, has generated electricity and steam for the Sellafield complex since 1995, with surplus electricity fed into the National Grid. However, in a letter in July last year from Sellafield Ltd to local authority planners, the Fellside CHP is described as ‘an aging asset approaching the end of its design life with a large degree of obsolesence’. 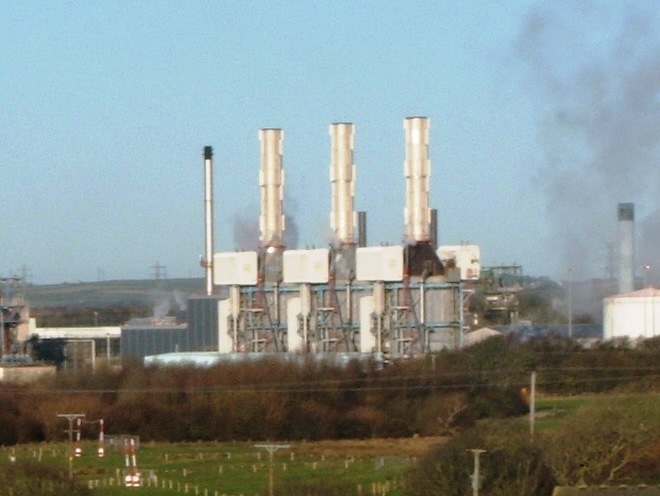 Accordingly, a planning application for a replacement plant was submitted by Sellafield Ltd in the Summer of 2017 to Cumbria County Council (temporary access road, contractor’s office accommodation etc) and to Copeland Borough Council (construction of new plant and demolition of CHP). Advertised in the local press, consultation on the application was held with local authorities, parish councils and other statutory consultees including the Regulators.

The new plant, referred to as the New Steam Generation Plant (NSGP) and for which planning approval was granted (with conditions) in late 2017, is to be built on Sellafield’s eastern boundary on the 10 hectare site currently occupied by the Fellside CHP plant and the Fellside Boiler Park.

The replacement proposal will be undertaken in three Phases which are summarised from Sellafield Ltd’s planning application as follows:

Though the timetable is already showing signs of slippage (Phase 2 is now expected to start early in 2019) NSGP will generate steam only (no electricity) and, using the current gas main infrastructure used by the CHP plant, will similarly be run on natural gas. First steam is expected to be generated by NSGP in 2020, after which CHP will be taken out of service and fully demolished by 2025. All future electricity requirements for the Sellafield site will be sourced via the National Grid.

NSGP is described by Sellafield Ltd as providing – when compared to CHP – a reduced visual impact and environmental improvements. The improvements include a 70% reduction in the use of natural gas; reduced SO2 and NOx emissions and a reduction in noise impact. The new plant, which will comply with the Industrial Emissions Directive (which becomes effective in 2020), will serve the continuing demand for steam by Sellafield ‘until the end of site operations’. Should the need arise, the existing Fellside Boiler Park will provide a back-up/emergency steam supply for the site..