The cat and mouse surveillance of the two Barrow-based nuclear ships Pacific Heron and Pacific Egret entered its penultimate stage yesterday when a consignment of plutonium  was loaded onto the Pacific Egret in the tiny nuclear port of Tokai Mura on 22nd March. 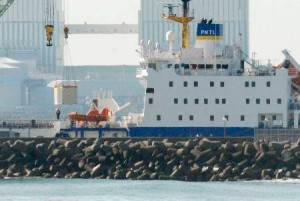 Dashing officialdom’s best efforts to keep the loading – and indeed the ships’ entire voyage from Barrow-in-Furness via the Panama Canal to Japan and onward to the USA – under wraps,  the loading of at least seven containers on 22nd March was watched and filmed by local NGO’s and Japanese media crews with helicopters who reported that, along with 331 kgs of plutonium, a consignment of  Highly Enrished Uranium (HEU) may also have been loaded.

Sailing from Tokai Mura under escort, the Pacific Egret made out to join up with the Pacific Heron. Once escorted out of Japanese territorial waters, both ships will head off on the almost two-month long haul to the US port of Charleston in South Carolina – with the Pacific Heron ‘riding shotgun’ on the Egret’s toxic cargo. The ships, owned by Pacific Nuclear Transport Ltd (PNTL) and managed by International Nuclear Services  (a wholy owned subsidiary of the Nuclear Decommissioning Authority) are expected to arrive at Charleston around mid-May via either the Cape Horn or the Cape of Good Hope route – the use of the Panama Canal having been ruled out by the US Department of Energy.

The contentious shipment of what is officially acknowledged to be prime terrorist material is one of many scheduled under the US-led Global Threat Reduction Initiative (GTRI) whereby, for ‘safeguarding’ purposes, such materials as plutonium and HEU are dumped at the Savannah River nuclear complex.  As laudable as the GTRI initiative may appear, it has major shortcomings, one being the deliberate exposure of such dangerous materials to the everyday risks and perils of long sea voyages and the attentions of increasingly sophisticated hostile forces.

The dangers of such attacks are evident not only by the (failed) attempt to keep these sea transports under the radar, and the heavy escorts in Japanese waters deemed necessary by the US and Japanese Governments, but also the arming of the Barrow ships with naval canon and the addition of heavily armed security guards drawn from the UK’s Civil Nuclear Constabulary’s Marine Escort Group. Further, under a deal struck by the seafarers’ union Numast (now Nautilus International) in 1999, service by officers on board PNTL’s armed ships was to be rewarded with a pay bonus that reflected the ‘very special conditions of service’ – with addtional ‘war zone’ payments if the escort team had to fire weapons in defence of the ship, its cargo and/or its crew. 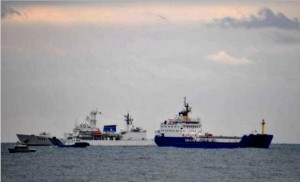 A further major shortcoming of the US-led intiative is that the Savannah River facility has, with shades of Sellafield, been sacrificed as an international dumping site for foreign nuclear wastes – in this case plutonium for which there is no final disposal plan. The Savannah River Site Watch Director describes the plutonium shipment simply as a commercial dumping operation and points to much of the plutonium and HEU now onboard the Pacific Egret having originated in the UK. And yet a third shortcoming is that today’s shipment from Japan represents little more than scratching the surface of safeguarding Japan’s plutonium stockpile which stands today at some 47 tonnes which includes the stocks currently held at Sellafield and in France produced over decades by spent fuel reprocessing. In a Press Release issued in Japan on 22nd March, five non-governmental groups (including CORE) charge that the shipment of weapons-grade plutonium on the Pacific Egret exposes not only the failure of global plutonium reprocessing programmes but also Japan’s nuclear policy and plans to open a new reprocessing plant at Rokkasho Mura whose original start-up date has already been postponed more than twenty times.

For those with long memories, the Japanese Coastguard vessel Shikishima (pictured) will be remembered for its use in 1992 to escort the specially converted PNTL ship Pacific Crane (re-named the Akatsuki Maru which, with makeshift accommodation for security crew bolted on the stern, resembled more of a stately Spanish galleon than a secure cargo ship) was re-flagged under Japanese colours specifically for the sea transport of over one tonne of plutonium  from France to Japan – a voyage subsequently described as a diplomatic embarrassment for the Japanese Government. The 6500 tonne Shikshima, one of the largest patrol vessels in the world gained further notoriety at the start of the 1992 voyage when it was twice involved in English Channel collisions with the Greenpeace ship Solo which was shadowing the plutonium shipment.