Perched atop Sellafield’s 1950’s Primary Separation Plant (the B204 reprocessing building) the 61 metre tall discharge stack is to be demolished at a rate of around 1 metre per week. 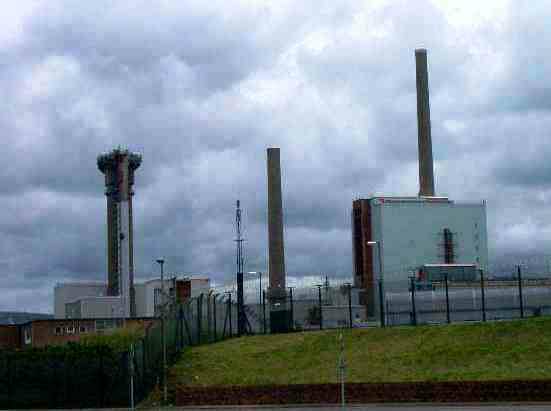 At a combined height (building plus stack) of 122 metres, the old facility is the tallest historic structure (on right) on the site. Along with the Windscale Pile No 2 stack (on left), it stands out on the West Cumbrian skyline like the proverbial sore thumb

In 2005, a seismic assessment of the Primary Separation Plant and its associated stack was carried out and found to fail modern seismic standards. Ten years later in 2015 the stack was described by site owner Nuclear Decommissioning Authority as ‘posing a significant seismic risk to the Sellafield site’. Though process operations in the building below the stack were abandoned after an accident in 1973 (see later), the stack itself – despite its seismic instability – continued in use as a discharge point for radioactive gases to air until early 2016 when a new discharge stack was commissioned. Like its predecessor, this new Separation Area Ventilation stack (SAV) is designed to ‘ventilate’ – the industry’s currently fashionable word for discharge – a fleet of other old facilities. 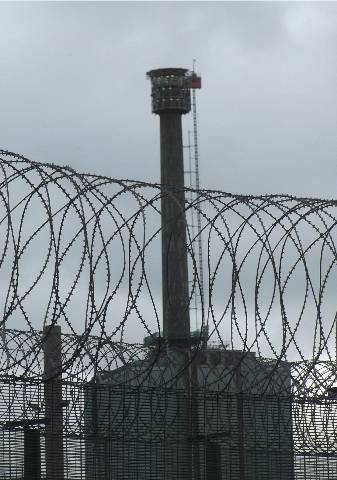 The stack in October 2017 sporting  its self-climbing demolition platform as designed by project contractor Nuvia Ltd. 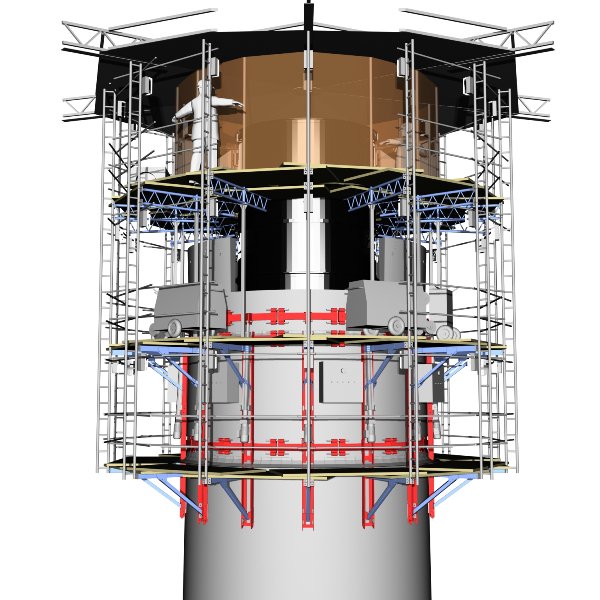 Conventional techniques such as the use of explosives or cranes for the demolition of B204’s stack had long been ruled out because of its location in Sellafield’s Separation Area described as a ‘70-year-old tangle of buildings, storage ponds, pipework, utilities and equipment’, including the Analytical Services Laboratories which saw recent bomb squad activity.

The self-climbing platform, held in place by friction and claimed to be able to move at 5mm per second will be used to remove the estimated 600 tonnes of concrete and rebar and some 25 tonnes of stainless steel that make up the old stack. Working downwards at a rate of around 1 metre per week and adapting to the tapered shape of the stack,  sections of the structure and the internal metal flue will be removed by hand using  drills, concrete crushing jaws and plasma steel cutting torches – the materials then placed in waiting waste skips and lowered to ground level for monitoring. The demolition project is scheduled to be completed by 2020.

The B204 Primary Separation Plant was built between 1947 and 1951 and used to recover plutonium from Windscale Pile fuel and to reprocess fuel from the Calder Hall and other magnox reactors. With the subsequent transfer of the magnox work to the new B205 reprocessing plant in 1964, some areas of the Primary Separation Plant were closed down but one part of the facility was converted as a trial ‘Head End’ in which oxide fuel from the next generation Light Water Reactors (LWR) then operating outside the UK was dissolved in the organic solvent Butex before being transferred to B204 for reprocessing. As an early forerunner to the Thermal Oxide Reprocessing Plant (THORP), the converted plant operated from 1969 to 1973 when a major accident forced its subsequent permanent closure.

Following a one-year lull in the operation of the new Head End (to allow for maintenance repairs to B205), a new batch of solvent introduced for dissolution in September 1973 reacted violently with granules of insoluble fission products which had dried out and heated up the floor of the dissolver vessel. A steam explosion (blow-back) ejected a blast of radioactive gas into the building and stack  contaminating 35 workers with skin and lung contamination largely from Ruthenium-106. After evacuation, the building was found to have been contaminated up to 100 times the maximum permitted level. Despite subsequent efforts by then owner British Nuclear Fuels to bring it back into operation, the plant never again operated after the accident and is being decommissioned.