Sellafield Ltd was forced to put out a press statement in the early hours of this morning (Saturday 21st October) to calm fears of a potential chemical explosion in a laboratory on site. This followed an audit being carried out by the Company which yesterday had identified a number of canisters containing ‘non-nuclear’ chemical solvent which had been stored in the laboratory for 25 years.

Whilst refusing to identify it, Sellafield Ltd confirmed that the chemical – an industrial solvent no longer used on site –  once crystalized, had the potential to become unstable and pose a significant fire hazard if exposed to air. The company refuted the suggestion that any explosion had taken place and stated that bringing in the Army’s Bomb Disposal squad reflected ‘leaving nothing to chance’ when managing such chemicals in accordance with the Control of Substances Hazardous to Health (COSHH) Regulations, and was ‘in line with best practice and established procedures’. Sceptics will query why, when similar audits are routinely carried out across the site, the Bomb Squad is not a more frequent visitor o Sellafield. 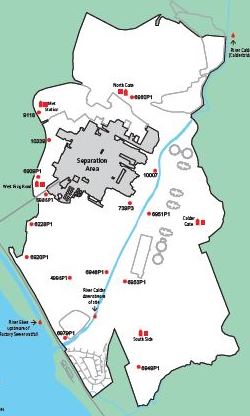 The Separation Area, shown within the Sellafield site, is home to facilities built for Windscale’s military operations 50 years ago. As some of the oldest buildings on the site, the Area includes the highly hazardous Legacy Ponds and Silos, old reprocessing plant – all now under various stages of decommissioning – as well as the currently operating Magnox reprocessing plant, the array of High Level Waste tanks and the Vitrification Plant. The confined space between buildings  continues to cause additional difficulties for decommissioning and other work.

Those concerned with the safety implications of the incident – and the consequences to communities around the site – point to the recent events to have affected Sellafield and its capability to fight fires and to evacuate the site. Just this week (Tuesday and Thursday) the site’s firefighters have been on strike over pay – strikes that caused major chaos on the main roads leading to and from the site – a gridlock that would have made any timely evacuation impossible. Such a logistical nightmare continues to be exacerbated by storm damage inflicted by the major storm Ophelia earlier in the week whereby flooding and other storm damage resulted in rail and road closures and – with some local road bridges still closed – more gridlock. Similar chaos is expected to be caused by this weekend’s Storm Brian.

The latest statement from Sellafield Ltd suggests that dealing with the incident will be completed later today (Saturday) once the chemicals have been removed from the laboratory, placed in a specially dug trench and detonated by the explosive experts from the Bomb Squad. The explosions would be audible off-site.