‘As a site, the full appreciation of chemical legislation, including The Dangerous Substances and Explosive Atmospheres Regulations DSEAR, has been inadequate’. [Sellafield Ltd Board of Investigation report on 2017 ‘chemical event’ and made available to CORE in April 2018]

Many of the findings of the more recently published (20th June 2018) National Audit Office (NAO) report will come as little surprise, once again apportioning blame for a litany of missed milestones, mismanagement of contracts and delays and overspend on major projects by site owner the Nuclear Decommissioning Authority (NDA). The report also criticises the Government’s failure to challenge and assess the NDA’s performance.

Of Sellafield’s 1400 buildings (operational and legacy), some are considered by NAO to fall short of modern standards and, through deterioration, ‘pose a significant risk to people and the environment’. Identified as amongst Sellafield’s top 10 highest hazards is the site’s plutonium stock and associated management facilities, the NAO report warns specifically of decaying plutonium canisters – a leak from which would add to the growing list of ’intolerable risks’ posed by Sellafield as identified by the Office for Nuclear Regulation (ONR) and the acknowledged risks  posed by the volumes of hazardous wastes and materials stored in run-down buildings.

Yet curiously absent from the references to run down buildings and intolerable risks – and despite making the national headlines when the Army’s bomb squad was rushed to Sellafield late one October weekend last year to deal with unstable chemicals – is the site’s Analytical Services Laboratory (ASL) facility and the cocktail of chemicals and radioactive materials it holds.

One of the oldest facilities on site (built in 1951) and located in the tight and highly controlled confines of Sellafield’s Separation Area alongside old reprocessing plant and the high hazard legacy ponds and silos, around 50 of ASL’s original 150 laboratories are currently operational. Described by the Office for Nuclear Regulation (ONR) in June 2017 as a ‘relatively high risk’ facility whose laboratories hold a ‘considerable radiological inventory’ that ‘has potentially high off-site consequences in the event of a major accident’, it is little wonder that the Bomb Squad’s arrival in late October 2017 to deal with ‘unstable chemicals’ and their potential to ignite or explode; the evacuation of workers and a 100-metre cordon thrown up around ASL should have triggered major alarm bells locally and further afield.

Updates on the event published on Sellafield’s website concluded on 1 November 2017 that ‘our chemical disposal work has concluded and the Analytical Laboratory is preparing to restart’ suggested that all was well with ASL – but not so, as evidenced by the findings of Sellafield’s subsequent Board of Investigation report which, somewhat suspiciously, was published on 1st February 2018 – but in summary form only and not in full as had originally been promised. The full but redacted investigation report, which is still not in the public domain and only obtained by CORE after specific requests to Sellafield, highlights the current and historic chaos and confusion that has underpinned Sellafield’s management of the hazardous chemical inventory contained within ASL in which radioactive materials are also stored. 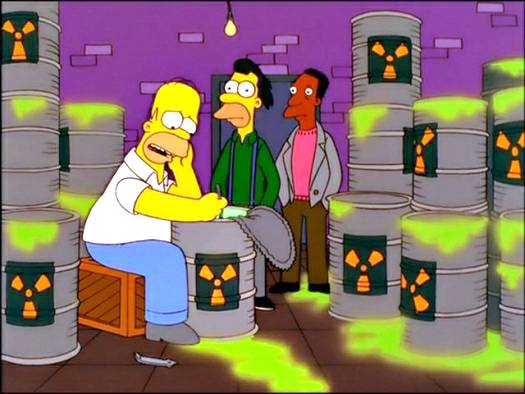 The Board of Investigation Report (URL?) into the event highlights a catalogue of incompetence of which the legendary Homer Simpson himself would have been proud. It reveals that the initial discovery of the suspect chemicals – a part filled 500ml bottle of potentially unstable Tetrahydrofuran (THF) stored in a flammable vault within ASL – had actually been made on 3rd October – almost three weeks before the danger was made public on 20th October – the same day that, after a sequence of internal committee meetings, Sellafield declared an Operational Alert and the Army’s Bomb Squad was belatedly called in to detonate the chemicals via a series of controlled explosions made on 21st and 22nd October.  Following a further inventory check of the laboratories which discovered more suspect THF and vials and bottles of Quickszint, the Bomb Squad had to be recalled and continued to make further disposals until the 1st November.

Highlighting the many failings of Sellafield’s chemicals management, the Board of Investigation’s critical report arrives at the following alarming conclusions  :-

Time alone will tell whether lessons have been fully learned from the chemical chaos that has clearly ruled at Sellafield for many years. In recognition of ASL’s obvious shortcomings, plans (the Replacement Analytical Project RAP) are afoot to transfer ASL’s work and materials to a new facility within the site but are unlikely to be completed until 2028 as noted in NAO’s recent report – its sole reference to the laboratories. The almost 70-year old ASL, described by someone involved in the Replacement Project as ‘in terminal decline’, must struggle on for a further decade thereby posing yet another intolerable risk from its chemical cocktail,