Because of its weapon-useable plutonium content, new MOX fuel requires stringent security measures during its transportation. Previous transports of plutonium in dioxide powder form – from the French reprocessing plant at La Hague to Japan – have been made with fully military escort. The original US requirement for the escort referred also to future transports of plutonium in MOX form and was designed as a deterrent against action on the ships by terrorists or rogue regimes keen to acquire plutonium for weapons or other purposes. In MOX fuel form the weapon-useable plutonium can be extracted in a relatively short timescale and without the full sophistication of a reprocessing plant. 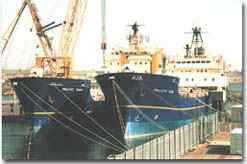 2 BNFL ships being armed in Barrow

Largely for cost and public relations purposes, the final transport of MOX fuel from Sellafield’s MDF plant to Japan has dispensed with a full military escort. Instead, two PNTL ships were refurbished, converted and armed to provide an escort for each other on the Journey to Japan. The Pacific Pintail, with its Sellafield MOX cargo, and the Pacific Teal with a cargo of MOX collected from France are the first of an estimated 80 such trips over the next few years.

The refurbishment and conversion of the two ships, was undertaken by Marconi Marine at Barrow Docks, between September 1998 and May 1999. As well as the fitting of new radar and satellite communications systems, work included the construction of extra crew and working accommodation, the placement of a high pressure water cannon around the ships and the fitting to each ship of three 30mm naval cannon capable of firing over 900 rounds per minute. Under agreement with the United Kingdom Atomic Energy Authority Police, a security crew of 13 police guards is seconded to each ship. The guards are armed with assault rifles, shotguns and handguns as well as being equipped with body armour and gas masks.

The first MOX shipment left Barrow docks on the 19th July 1999. Following departure the route to Japan was announced as being via the Cape of Good Hope, between Australia and New Zealand and northwards to Japan. The UK cargo consists of 8 MOX fuel assemblies ordered from BNFL by Japan’s Kansai Electric Power Company for use in the Takahama power station. The UK and French cargoes contain between them 450kgs of weapon-useable plutonium, sufficient for a least 50 nuclear weapons.