Commenting on the publication today of the 17th Report of the Committee on the Aspects of Radiation in the Environment (COMARE) – and its spokesman’s statements to BBC Radio Cumbria  (minutes 03.35 to 08.07) – CORE notes: 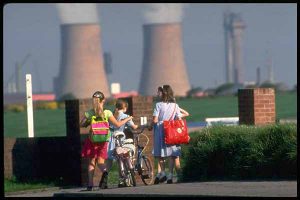 CORE’s health campaigner Janine Allis-Smith said today:
Our initial reading of the Report suggests that, apart from this new COMARE love-in with the widely discredited population mixing theory, it is little more than a rehash of earlier reports. Radiation is a well-established and long-acknowledged cause of childhood leukaemia and it is particularly disturbing to note its apparent abandonment by COMARE in favour of an unsubstantiated theory that for almost 30 years has singularly failed to identify the causal virus. As German Federal Government radiation expert, Dr. Wolfgang Hoffman puts it: ‘There is little evidence of this population mixing hypothesis and absolutely no evidence of either a virus or antibodies to it. This hypothesis has primarily arisen to explain away the risk of radiation’.