At 1030 on Tuesday 10th October 2017, CORE Campaigners Janine Allis-Smith and Martin Forwood will lay flowers at the Sellafield site perimeter fence in a simple act of remembrance of those whose health was affected by exposure to radiation in the plume released during the fire of 1957 – and the bravery of those who fought to bring the blaze in Pile 1 under control. Members of the public are invited to add their own floral tributes during a week of remembrance.

A CORE spokesperson said today: ‘The laying of flowers this morning is wholly marred by the recently confirmed ‘loss’ by Sellafield Ltd of the commemorative plaque laid in 1987 on the 30th Anniversary of the Fire. With some exceptions that have seen its unduly rough and insensitive treatment by site workers †, the plaque had served as a focal point for those wishing to pay their own tributes. Its loss and past treatment reflects a singular lack of the respect expected for a dedicated memorial’.

The plaque was commissioned by CORE and co-funded by Greenpeace and public donation. Already sanctioned by site owner British Nuclear Fuels, and preceded by a service of dedication, the plaque was laid at Sellafield’s perimeter fence at a point adjacent to the Windscale Piles on 10th October 1987. Attended by over 100 individuals, the laying of the plaque was accompanied by the symbolic planting of an oak sapling and the release of black balloons

CORE’s Martin Forwood added ‘The loss of the plaque and all it stood for is highly regrettable. We have however now received an apology from Sellafield Ltd for the loss together with an offer to commission, at its own expense, a replacement plaque of the same design and text. We trust the replacement will be treated with significantly greater respect and hope it will serve for many decades to come as a reminder to future generations of the UK’s worst nuclear disaster and as a place for remembrance rather than demonstration’.

The fire within Windscale’s military pile No 1 released a cocktail of radioactivity that for several days drifted to Ireland and eastwards across the UK into Holland, Germany and southern Scandanavia. The true health toll in terms of fatal and non-fatal cancers contracted by those exposed to the plume is unlikely ever to be known. Focusing largely on the levels of radioactive Iodine-131(thyroid) and Polonium-210 (lung) contained in the plume, health studies published since the Fire have projected a range of ‘hypothetical’ figures that suggest between 10-100 fatal cancers and over 250 non-fatal cancers. One 1983 study projected 1000 fatal cancers from Polonium-210 alone.

† An 8ft oak sapling planted alongside the plaque in 1987 survived for just a few weeks before being hacked down. A replacement sapling was similarly vandalised. The plaque itself, officially and unofficially moved from its site on a number of occasions, has suffered damage – in the form of cracks, deep scratches and scuffing to its face. The extent of the damage (some likely to have been caused by grass cutting equipment) was evident in 2007 when, following a period during which the plaque could not be found, it was returned in damaged condition to the perimeter fence in time for the 50th Anniversary commemoration that year. 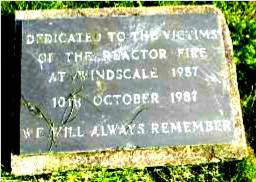