Respondents to NuGen’s Stage 2 Moorside public consultation which closed one year ago will learn little from NuGen’s response to CORE’s open letter to its CEO Tom Samson on 30th June.

NuGen’s response, delegated by CEO Tom Samson to the Manager of the somewhat inaptly named Communications and Engagement section, was received on 26th July (after two prompts for a response) and  makes little attempt to address the issues raised by CORE. These included clarification on the status of the Stage 2 consultation for which a promised Feedback report was conspicuous by its absence, on the expected completion date of NuGen’s strategic review following the bankruptcy of Westinghouse, and the implications for the Stage 2 consultation and its Stage 1 predecessor in the event that the Westinghouse AP1000 reactor – on which the consultations were based – was abandoned in favour of another reactor type for Moorside.

Refusing to comment on some of CORE’s questions on the grounds that ‘they are commercial processes’, NuGen has confirmed only that it intends to publish a Stage 2 interim consultation report – ‘but this has been deferred to ensure that changes which arise as a result of the reviews (an engineering and wider strategic review) are appropriately reflected in the report, which will reflect both the feedback that NuGen received and detail how NuGen will take that feedback into account’.

CORE’s spokesman Martin Forwood commented today that “NuGen’s inability to level with consultees, however uncertain Moorside’s prospects, reflects the extent of the turmoil facing its project and makes a mockery of its claim that ‘openness and transparency about our plans is the key to building trust”. The latest news of the plug being pulled on the half-built AP1000 reactors in the US and the fall from grace on the Tokyo Stock Exchange of NuGen’s sole investor Toshiba will further add to the increasing uncertainties swirling around in the Moorside mists”.

With its liabilities exceeding its assets following the write-off of its bankrupt Westinghouse subsidiary, Toshiba has now been demoted to the second tier of the Tokyo Stock Exchange with an accompanying drop in share value, and is facing the prospect of being delisted from the stock exchange altogether.

The joint owners of the VC Summer site in the USA (South Carolina Electric & Gas (SCG&E) and Santee Cooper), where the construction of two AP1000 reactors started in 2013, abandoned any further construction of the two reactors last week citing that because of construction delays and cost overruns completion of the project would be ‘prohibitively expensive’ and ‘we simply cannot ask our customers to pay for a project that has become uneconomical’. A decision on the fate of the Vogtle plant in Georgia, where two AP1000 are also part-built,  is expected to be made by Georgia Power later this month.

Had construction at VC Summer continued, Unit 2 was expected to come on line in late 2022 with Unit 3 following in 2024. Often used as a template for Moorside, the actual build-time of 9-11 years for the US reactor site lays bare NuGen’s repeated claims that AP1000 reactors can be built in four years and that all three reactors proposed for Moorside would be built and producing electricity within a six-year time frame. 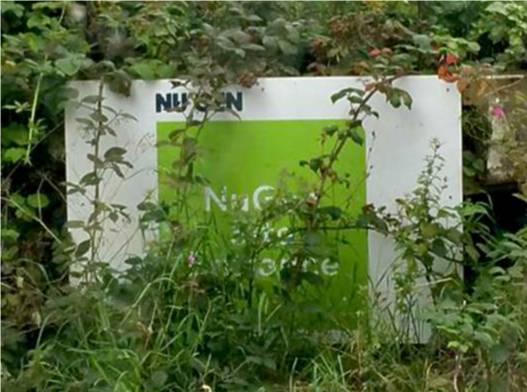 Martin Forwood added: “Now would be the time to scrap plans for Moorside altogether before NuGen inflicts any more damage on the greenfield site and UK taxpayers are forced to cough up towards its costs. As the recent site photo suggests, Moorside already appears to have been kicked into the long grass like its US counterpart”.