With Toshiba having stripped South Korea’s KEPCO of its ‘preferred-bidder’ status to take over the Moorside new-build project, NuGen’s intrepid Search for Hopeful Investor Team – shoulders hunched and heads down – are back once again on lookout duty scanning the seas for any sign of a new investor heading for West Cumbrian shores. 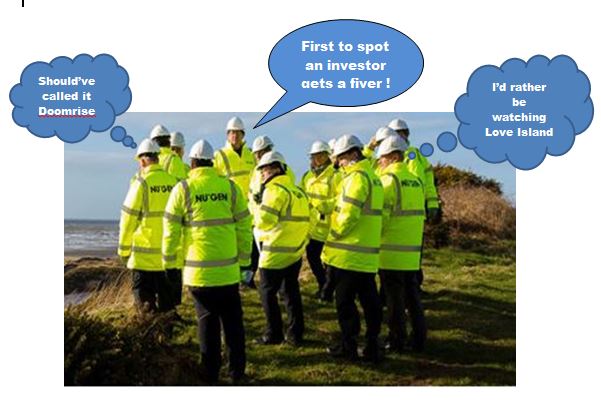 Already discouraged by previous tideline sightings of the washed-up remains of Moorside’s erstwhile investment partners Southern & Scottish Energy (SSE), Spain’s Iberdrola and France’s Engie (formerly GDF Suez), all of whom deserted the Moorside ship to pursue greener pastures, dejected team members had been pinning their hopes on South Korea sailing to the rescue – a rescue that now appears to have been holed beneath the waterline by Toshiba’s latest announcement.

It was only just a year ago, with KEPCO then installed as preferred bidder, that NuGen’s CEO Tom Samson was telling ITV Border News and anyone else who’d listen that he was “110 per cent” certain that Moorside would go ahead. Today, as prospects for the development slip closer to oblivion, he must be regretting his bluster as he discovers that his own job and those of other employees who survived previous restructurings of NuGen are ‘on the line’.

Few will have much sympathy for their collective plight. For the writing on the wall for Moorside was evident from day one when the original NuGen consortium bought 190 hectares of green field adjacent to Sellafield from the Nuclear Decommissioning Authority (NDA) for £70M in 2009 – despite the land being known to be less than optimum for new-build because of its geology, poor local infrastructure and its remoteness from where its electricity was needed. It was similarly clear that NuGen’s subsequently projected construction and operation timetable for Moorside – building and bringing into operation three Westinghouse AP1000 reactors in just 6 years – was laughably out of kilter with reality.

Once leading the race to get the first new UK reactors up and running, Moorside now languishes way down the list of potential new-build developments in the UK. Time to recall the lookouts and pull the plug on what many investors will now see as ‘soiled goods’ with acute funding problems and a project that can never compete in terms of cost or environmental benefit with the flourishing renewables sector.