Whilst the Brexit vote and Donald Trump’s elevation to the US Presidency have turned the international status quo upside down, other things – such as the nuclear industry’s insatiable appetite for taxpayers’ money, never change.

Sellafield’s Evaporator D project, with NuGen’s Moorside in hot pursuit,  is a prime example as it limps along, sustained only by ever increasing helpings from the public purse. With nuclear power rightly acknowledged as being a hideously expensive way of boiling a kettle, then Evaporator D – known to the Sellafield workforce as the ‘Big Kettle’ – must be breaking all records. Initially costed at £90M (2007) and originally due to come into operation in 2010/11, the cost has increased eight-fold to £740M – as at September 2015.  With a ‘challenging’ operational date currently pencilled in as 2017/18, and with updated figures yet to be published, the sky is clearly the limit for Evaporator D.

The tortured progress of the new Evaporator, designed to reduce (by evaporation) the volume of the dangerous liquid High Level Wastes (HLW) produced by spent fuel reprocessing,  reveals a catalogue of project mismanagement and eye-watering cost hikes that show little sign of abating. Promoted specifically by BNFL and subsequently by the NDA as being urgently needed to support continued reprocessing operations in the B205 (magnox fuel) and THORP (oxide fuel) plant, Evaporator D is currently being shoe-horned into the HLW complex where it will join its three fellow but semi-crippled evaporators (A,B & C) whose increasing unreliability through age and internal corrosion had underpinned the urgency for Evaporator D.

Despite claiming not to recognise the £90m estimate of 2007, the NDA was nevertheless  happy to confirm a price tag of £100M  in 2008, since when the cost of Evaporator D has risen in almost annual increments – with the biggest hike to over £600M reported in a damning report by the National Audit Office that was highly critical of the NDA’s project management and that of its subsequently sacked contractor Nuclear Management Partners (NMP) who had acted for the NDA as Sellafield’s Parent Body Organisation since 2008. 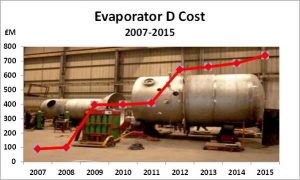 The cramped conditions in and around the HLW complex was a major factor in employing the novel option of having the main elements of the Evaporator built off-site (by Interserve at Ellesmere Port) and delivered by barge to Sellafield beach in the form of 11 modules, the largest weighing 500 tonnes and measuring 12.5 x 7.5 x 27 metres tall.  The Evaporator, whose top and bottom sections are shown above being fabricated at Ellesmere Port, will operate in an upright position once installed at Sellafield.

Novel as the option was, it soon fell foul of a range of problems that included a disorganised supply chain, design changes, the quality of module fabrication, and seismic qualification. With the modules delivered to Sellafield beach and hauled onto site between 2011 and 2013, Evaporator D’s cost increases from 2013 onwards are largely attributed by the NDA to the ‘transfer of incomplete modules to site’ which has resulted in extensive additional cutting and welding work being needed –  in a confined work space – to connect together the component parts of the Evaporator system.

The greatest irony of all is, of course, that despite the early  hullabaloo about its urgent and crucial support role for reprocessing at Sellafield, Evaporator D can be of service to THORP reprocessing (due to finish in 2018) for no more than one year at best.  At worst it will be of service only for THORP’s post-2018 clean out, the remnant days of B205 reprocessing which is due to end around 2020 and other site decommissioning work.  Faced with this prospect and the embarrassing reality that its much vaunted Evaporator D could indeed miss the THORP reprocessing boat for which it was primarily designed, the NDA and Sellafield Ltd damage limitation teams have recently swung into top gear by stressing the Evaporator’s future decommissioning role through its ability to deal with the larger waste particles expected to be encountered during the coming years of clean-up work.

For a project whose £740M cost will undoubtedly escalate further, aggrieved taxpayers may take some comfort from Sellafield’s 2012 announcement that plans for a fifth (£600M) Evaporator E had been scrapped. But they should now cast a wary eye to NuGen’s new-build project just across the road from Sellafield where the prospect of further pilfering from the public purse is simmering on the back-burner.

Largely under-reported by the media, Moorside’s developer NuGen told the House of Lords Economic Affairs Committee in early November  that it had been  calculating how elements of its proposed triple AP1000 reactor site might be carved up to allow the non-nuclear elements of the project to be paid for by the UK Government. For despite casting its net far and wide in an attempt to drum up the additional finance to meet the clearly under-estimated £15Bn cost of building Moorside, the consortium of Japan’s Toshiba and France’s Engie  is clearly struggling to attract support – a struggle intensified by the not unexpected news today that Engie itself has declared that it plans to pull out of the Moorside and other new-build developments because ‘it no longer has the resources to finance such expensive projects’ and wants to concentrate on renewables instead.

Hoping that the Treasury’s taxpayer cavalry will ride to the rescue, NuGen’s CEO Tom Samson told the House of Lords that one non-nuclear elements of the project has been identified by the consortium as the seawater system required to cool Moorside’s reactors. Exactly how this vital component of reactor operation can be classified by NuGen as a non-nuclear element and thereby qualify for taxpayer support is as incomprehensible as  is the further suggestion that major ‘civil works’ such as the removal of excavation spoil, could also qualify for Government largesse. A telling sign of NuGen’s dire financial straits maybe, but  many tax-paying observers will nevertheless be wondering just exactly which part it is of the Government’s erstwhile promise – that future developers would shoulder the whole cost of new-build in the UK – that NuGen doesn’t understand or seeks to circumvent in its hour of self-inflicted need.

Then there’s the suggestion of Government assistance in improving the transport infrastructure in the Cumbrian area to help support both the decommissioning operations at Sellafield and the proposed construction site at Moorside.  Leaving aside NuGen’s less than subtle ploy to boost its case for infrastructure improvements by lumping together Moorside and Sellafield decommissioning, local communities will nevertheless know to their frustration that pleas to improve West Cumbria’s chronic road and rail infrastructure have fallen on deaf Government and industry ears for decades. Even the construction of the Thermal Oxide Reprocessing Plant (THORP) in the 1980’s and 90’s – a project of similar workforce size to that forecast for Moorside and with similar demands on the local infrastructure – saw no improvements whatsoever made to the outdated transport system. With Sellafield’s commercial reprocessing operations in their death throes and the site in clean-up mode, it would be morally indefensible for the taxpayer to be expected to step in now to bank roll a Japanese/French private consortium that has clearly bitten off more than it can chew and finds itself short of funding for a project whose timetable and sums increasingly fail to add up.

The very notion that the Treasury should ride to the rescue of NuGen’s vested interest in a new-build project that has considerably less than full public support will be anathema to taxpayers, particularly as they witness hospital and community services in West Cumbria – whose survival is in everyone’s interest – being increasingly starved of Government support. A thought must be spared too for those facing the double whammy of increased electricity bills as a result of the estimated £2.5Bn cost of connecting Moorside to an upgraded North West Coast grid system – a contentious and hugely disruptive and visually damaging upgrade that National Grid has confirmed again recently would not be necessary if the Moorside project was not on the table.

Whilst time will tell whether the historically apron-stringed – some would say incestuous – relationship between Government and UK Nuclear will come up trumps for NuGen, there will be no public sympathy for a consortium that has walked open-eyed into a remote green field site well documented as being ‘less than optimum’ for new-build in construction, infrastructure and transmission terms. It has made its bed and should now lie in it or, as the other saying suggests, get out of the Cumbrian kitchen if it can’t stand the financial heat.